The Question of Question Time 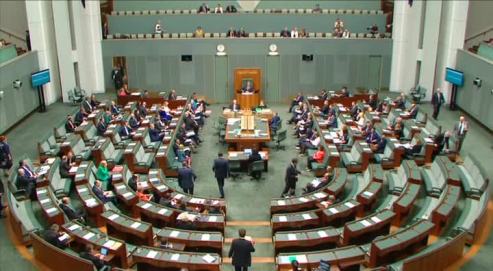 We all know Parliament Question Time is a bit of a joke, right?  You can get that perception from merely watching people live-Tweeting it. Lots of teeth-gnashing, hand-wringing and beating of heads against walls.  There’s little doubt it needs reform, but some people seem to have arguably unrealistic notions about the form that reform might take.

John Lord, author at the AIMN Network, is one such person.  He posted this piece, the guts and thrust of which I basically agree with; I recommend checking it out. At the end of the article he posts a list of Question Time reform ideas.  When he posted the same article a few months ago, I offered a response to those reform suggestions.   Taking a leaf out of this author’s “go forth and plagiarise yourself” book, I reproduce that response here (with some additions and grammar repairs – I was in a hurry at that time). John’s ideas are in bold. I’m also skipping a couple to avoid repetition; they can be seen in the original article.

I absolutely agree that QT is a bit of a farce and I agree regarding “dixers”. In fact, I’d be most pleased if Labor announced a policy of QT reform that involved ridding QT of the time allotted to questions by the Government, for the Government. For me it flies in the face of the whole idea. That said, I’m glad John said he was “thinking out loud” with regard to his reform ideas, because I think most of them are problematic.

1 “An independent speaker. Not a politician. Not only independent but elected by the people.”

There are practical reasons that Speakers are taken from the ranks of elected parliamentarians. Generally speaking (pun intended, I think) Speakers are persons with considerable parliamentary experience. That experience is important in terms of the sensible and flexible application of Standing Orders.

But Speakers do a lot more than just sit in the chair and enforce SOs when Parliament sits. They also run/oversee two departments: the Department of the House of Representatives and the Department of Parliamentary Services. At the very least an “independent” elected person would require a tertiary degree of some sort to be qualified for these roles, absent of any actual parliamentary experience. I guess that’s doable, but how are such people to be elected? How many candidates can stand? 10? 500? Do we appoint a select panel to bring the number of candidates down to something workable? And if that’s acceptable why can’t that panel just select the Speaker and be done with it?

Oh, hang on. We have a problem, because we’re not just talking about a Speaker, we also have a Senate President to elect. Oh, and then there’s the Deputy Speaker and President. Oh, crap, then there’s the second Deputy Speaker and President. This is getting awkward. Plus Parliament only sits for, let’s be generous and say 13 weeks of the year. Elected Members go back to their electorates and in theory do work there. What are these non-political, non representative folk going to do the rest of the time?

What happens if one of these persons croaks or quits during the life of the Parliament? Another election? Will the Government/Parliament retain the right to sack any of these persons? If not, what if they turn out to be shite?

2 “Imagine if the Speakers Office adjudicated on answers and published a relevance scale on its website.”

It’s already difficult for a Speaker to judge the relevance of any given answer, other than when the irrelevance is glaringly obvious – i.e. when no attempt to be relevant is forthcoming. For a Speaker to be able to construct a “relevance scale” for answers they’d have to be over – quite literally – every item of every portfolio across Government, or at least they and their office would have to be. That doesn’t seem practical to me.

There’s also a dimension to this that’s missing in this commentary – QT contains not just answers, but questions.  What about their relevance?  A lot of the time questions from Oppositions are really only relevant to their own political agenda, and are often entirely driven by that agenda, and are therefore designed to create embarrassment or trouble for the Government. The Abbott Opposition was notorious for this.  I’m not sure how much a Government ought concern itself with the level of relevance of a question put to them by an Opposition that is enacting cynical and morally corrupt motivations.

How do we resolve that?  We most certainly cannot have a situation where a Speaker gets to determine the “relevance” of a question from the Opposition.  That would be outrageous and unworkable. Besides which it would involve the existence of some sort of “objective criterion” by which a thing such as “relevance” could be scaled. No such thing exists.

4 “Freedom of Information could also come under the umbrella of the Independent Speakers Office with it deciding what could be disclosed in the public interest.”

Wow, these people are going to have to be superhuman!  There’s a reason FOIs are handled departmentally, and it’s not just the issue of volume, but also that only departmental staff can possibly judge the validity and appropriateness of FOI requests made to their portfolios (or agencies) and thereby determine the nature of any response. For the same reason as before, it’s not possible for the Speaker’s office to perform this role (unless you’re going to turn it into the largest office in the Government). It’s also arguably a very bad thing for any single Government office to handle all FOI requests. If you have a crappy office then everyone is screwed. I think it’s very much one of those basket and eggs things.

5 “Dorothy Dixers would be outlawed because they serve no purpose.”

I quite agree with this one.  They really are quite ridiculous and appear to be nothing but a means by which the Government of the day can limit Question Time and the degree to which an Opposition – i.e. the alternative government – can scrutinise them.  It merely provides yet another opportunity for Government Ministers to make self-serving speeches.

6 “I acknowledge that our system requires vigorous debate and human nature being what it is passion sometimes gets the better of our politicians. When it occurs the Speaker should have the power to call time outs.”

Don’t these powers effectively exist? The Speaker can eject people misbehaving and the PM can stop QT any time he likes.  We don’t need more rules and Speaker powers to improve Question Time.  What we need is more depth of character and respect for the electorate from our elected Members.  That’s the only thing that can fix Question Time.

7 “Lying to the Parliament is a serious misdemeanour yet the Prime Minister and the Ministers in this Government do it on a regular basis. An Independent Speaker would be able to inflict severe penalties on serious offenders.”

There are already penalties for deliberately misleading the Parliament. It’s not an easy thing to prove. Simply making a statement that isn’t true doesn’t qualify.  See my recently posted article on lying for a deeper analysis.

8 “In fully answering a question, a minister or parliamentary secretary must be directly responsive, relevant, succinct and limited to the subject matter of the question. Penalties apply.”

And we come full circle back to the issue of the impossibility of enforcing a rule of relevance beyond what already exists.  Oppositions can already raise a point of order relating to relevance and a Speaker may see fit to enforce it.  There does not, and cannot exist any objective or ultimate standard by which relevance might be judged.  The best we can ever hope for is a Speaker with some ethical and intellectual credibility and half a fucking brain.  I’m not sure how we might go about establishing a greater assurance of that.

But you know, when all’s said and done, who the hell is going to introduce Question Time reforms anyway?  As it is the system is such that Governments can and do manipulate the dynamics of Question Time so as to minimise the possible damage to them from it.  What party is going to throw that ability away?  We had the perfect opportunity for such reform when the Gillard Government needed the support of a number of crossbenchers, most of whom we lauded as political heroes.  They did nothing in this area.   I don’t expect that to change anytime soon.

As always, your thoughts are welcome.

Dan Rowden is a freelance writer and philosopher who has been active in philosophical and political discourse since Malcolm Turnbull invented the Internet in Australia. For the last 15 years he has contributed to and administered Internet philosophy forums. Politics is a secondary interest, but he recognises moments of significance in Australia's political history.
View all posts by Dan Rowden →
This entry was posted in Politics, Uncategorized and tagged Coalition, Election 2016, Labor, Parliament, Question Time, Speaker. Bookmark the permalink.